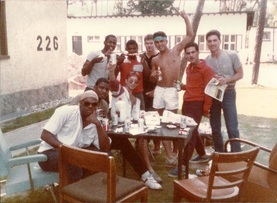 5th Battalion, 8th Armored Division
Saul Tanpepper is the speculative fiction pen name for Ken J. Howe, a retired PhD molecular biologist and biotech entrepreneur who writes full time in multiple genres. The pen name honors the memory of his high school buddy, who passed away at age 27. "Salt and Pepper" was a favorite epithet, given the author's premature graying.

After a childhood in a small town on the Erie Canal in Upstate New York, he entered the U.S. Army and was trained as a combat medic. He did a tour in West Germany before the wall came down, working as both a medic in an armored infantry unit in Mannheim and a hospital attendant in Frankfurt. After returning Stateside, he did a tour as a trauma specialist in the emergency room at Walter Army Medical Center in Washington, DC, and at Lawrence General Hospital in Massachusetts. 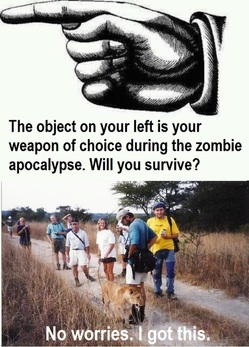 Africa 1999
He attended university in Santa Barbara, CA, majoring in biology and creative studies while working as a medical assistant in a variety of locations. He studied molecular biology and genetics as a graduate student, then completed his post-doctoral fellowship at Berkeley.

Prior to entering the work force, he and his wife spent six months traveling overland through the Middle East and Africa, logging over 50,000 miles in a refurbished garbage truck.

He spent 10 years in biotech, working his way from bench scientist to Director of R&D and site manager of a major pharma company. He then formed his own company, Collabria BioSciences, and was VP of R&D of another startup.

He retired from the business in 2011 to write and publish full time. Under his real name, he writes literary young adult, middle grade, and children's picture books. As Saul Tanpepper, he writes and publishes speculative fiction (scifi, horror, fantasy).
​
​He now lives in the San Francisco Bay Area with his wife, children, and a zoo-full of pets and farm animals.

The Undead Meet High-Tech in S.W. Tanpepper’s GAMELAND
Without a doubt, the cold undead are hot commodities right now. Zombie Walks are scheduled from coast to coast, often in conjunction with apocalyptic conventions. The Walking Dead series is hugely popular on television and zombie literature is enjoying a wave of immense popularity. A quick look at GoodReads and you’ll find a half dozen very active zombie groups, not to mention a couple dozen more where zombies and their fans have infiltrated.

all content, (including text and photos) copyright saul tanpepper © 2011-2016, unless otherwise noted. all rights reserved.


all content, (including text and photos) copyright saul tanpepper © 2011, unless otherwise noted. all rights reserved.