One man wants to destroy the world.
​One woman hopes to save it.

Hundreds die in a fiery train crash in northern China.

A cargo ship smuggling refugees is lost to calm seas off the Libyan coast.

Entire villages in Ghana are turned into ghost towns overnight.

A young freelance medical reporter uncovers a disturbing pattern between these seemingly unconnected events: each is preceded by the sudden spread of a mysterious ailment and is followed by the appearance of a man dressed in black and silver who witnesses claim is the devil himself. Are the tragedies harbingers of an impending biblical catastrophe or practice runs of a fanatical organization bent on global annihilation.
★★★★★
​Could not put these books down, had to read them all straight away. Well written and suspenseful.
~Amazon reviewer
INDIVIDUAL TITLES
​​VISIT THE AMAZON SERIES PAGE HERE.
​AVAILABLE IN BOTH DIGITAL AND PAPERBACK
MULTI-TITLE BOXSET AND OMNIBUS EDITIONS
BUY THE BUNDLE, SAVE A BUNDLE!
​
COMPANION TITLES
SHELTER IN PLACE
HINT OF A CURE 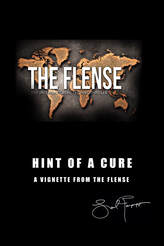 This vignette from THE FLENSE tells the untold stories of the lost boys of Huangxia Island, whom Angel meets at the beginning of Book 1: China.

Not available separately. Instead, this short story is included with Book 2: Iceland, as well as the boxsets and omnibus editions.

Here's a sample, but I recommend reading the full story anytime after Book 2:
At first glance, there appeared to be nothing remarkable going on. He counted some two dozen figures in the vicinity of the blaze and recognized several of them as the same group of boys who’d harassed them earlier in the day. While the majority of the kids sat or lay about in small clusters in the unprotected plaza, wrapped up in tattered hotel blankets to stave off the cold, a few were up and walking around. It was hard to tell, but they appeared to be passing out food and water, likely scavenged from the abandoned buildings. It also looked like the ambulatory ones were urging the sick ones to get up, possibly to stay warm, since after a quarter hour or so, none remained seated. Few of them appeared to be adequately dressed for the weather, yet, disturbingly, they’d all dispensed with their blankets.

Why would they stay out in the open, instead of taking shelter in one of the many abandoned buildings? The hotel he was in, for example, while damaged and molding from the rush of seawater that had swept over the island weeks earlier, was still a better choice than sleeping under the moonless sky, exposed to the elements. The upper floors remained livable.

At one point he realized that half the group had gone missing, so he backtracked the video until the moment he saw a half dozen or so splinter off and head across the plaza in the direction away from him. He caught glimpses as they crossed over open ground, their vague forms barely illuminated by the faint starlight. But even under such conditions he could tell they weren’t behaving normally. Their movements weren’t natural. Yet at the same time, he was struck by something familiar: They skulked, almost animal-like, as if they feared being caught.
​
Within minutes, they were gone, vanished like water draining into the ground, and they didn’t return for the duration of the recording. He’d wanted to believe they’d opted to find shelter, to sleep out the balance of the night and avoid capture by the PLA soldiers when they made their sweep once daylight broke. But he couldn’t shake the feeling that he was watching the prelude to some other, more sinister, second act.
ERASURE

A  vignette from THE FLENSE series that reveals what really happened to Angel's ex-husband, David Eitan.

Not available separately. Instead, this short story is included with Book 3: Africa, as well as the boxsets and omnibus editions.

Here's a sample, but I recommend reading the full story anytime after you have finished Book 3:
Death need not be the end of a man’s existence,
or his usefulness.
​
This time, they were cut off by a scream. Both men immediately pulled handguns from the holsters hidden beneath their windbreakers. The scream came again, and the sounds of scuffling feet issued from down the darkened second-story hallway. Alpha One gestured his partner over to the right hand staircase; he took the one closer to the disturbance himself. They mirrored each other climbing up the steps, fingers twined over the grips of their weapons. No more joking banter or teasing. They were all business now.

They’d gotten halfway up their respective staircase when David Eitan burst out onto the landing stumbling backward, as if he’d been shoved hard. He was still unclothed. His skin, still wet, looked pale and sickly under the brutal glare of the foyer chandelier. Bravo One charged out next. He immediately engaged Eitan, and the two began to grapple.
​
Bravo Two emerged last. She held up an arm to warn Alpha Team off. “Get back!” she cried. She slumped against the wall, and dropped her other hand from her neck, releasing a shockingly large gush of blood. “Get the fuck back. Don’t touch any of us!”
Übermensch AND Antiheroes 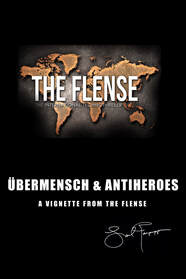 In this vignette, the fate of Gaetan de l'Enfantine is finally revealed. And how his reappearance coincides with the start of the Flense and the end of the world.

Not available separately. Instead, this short story is included with Book 4: Cuba, as well as the boxsets and omnibus editions.

Here's a sample, but I recommend reading the full story anytime after you have finished the series:
Kill a man, and you are an assassin.
Kill millions of men, and you are a conqueror.
Kill everyone, and you are a god.
~Beilby Porteus
​
Gaétan de l’Enfantine stood at the window, his feet perched on the narrow rock ledge, his back to the precipitous drop. From here, he had a full and unobstructed view of the rear of the plantation-style mansion.
​
He had, upon first arriving to the zip code earlier that morning, considered all of the usual options for introducing himself to the occupant of the house. The ordinary and socially acceptable choice was to present himself respectably at the gate. He had no doubt that doing so would win him an invitation inside, for while he and home’s owner had never met in person, had never even spoken, they were surely not strangers to each other. Their work over the years had made them unlikely conspirators.

But this was no ordinary social call. And Gaétan was not the kind of man to wait for an invitation.​
SEEDS 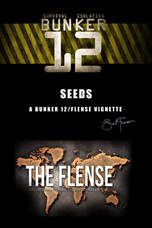 Seeds is a collection of "files" taken from a top government official's private archive offering insight into the program that developed the technology behind the Flense. It provides a bridge between THE FLENSE and BUNKER 12.

Not available separately. Instead, this short story is included with Book 4: Cuba as well as the boxsets and omnibus editions.

I highly recommend checking out this collection only after you have finished both series. But to whet your appetite, here's a little clue behind the WORLD OF THE FLENSE:
Man is only man at the surface.
Remove his skin, dissect,
and immediately you come to machinery.
~Paul Valery
​
the COMPANION SERIES, bunker 12
Requiring no more than the slightest skin-to-skin contact, the mysterious disease known as the Flense spreads with ruthless stealth and speed, decimating mankind before it can even respond. The infected, still living, are turned into soulless creatures called Wraiths. They are brutal killers that wreak destruction upon everything in their path.

The series consists of 4 full-length novels.

Check out this ★★★★★ rated post-apocalyptic series here.
All content, (including text and photos) copyright Saul Tanpepper © 2011-2021 unless otherwise noted. All rights reserved.